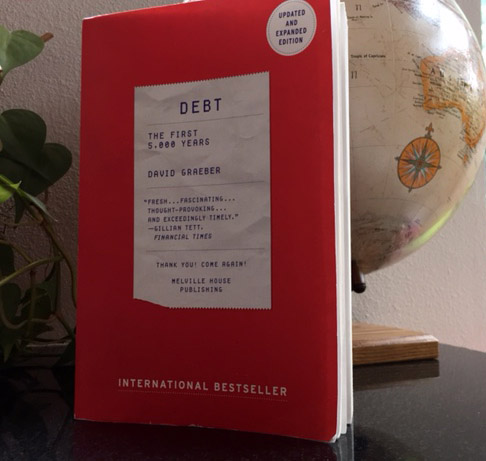 It’s good to be out of debt… even when that means finishing David Graeber’s Debt: The First 5,000 Years.  I had started on this book before diving into the rabbit hole of The Wealth of Nations, Communist Manifesto, Capitalist Manifesto, Divine Right of Capital, Et al, revisiting Debt’s 400 pages on occasion to clean my mental palate between other books.

Debt is another book destined to be well quoted over the next hundred years, like Capital in the 21st Century.  Both have great insights into historic economics.  Both suffer from authors who think nothing of spending 100 pages to explain a concept, then think it necessary to repeat that concept a dozen more times in the next few hundred pages.  And then one last time in a 20 page conclusion.

The first three chapters of Debt do not suffer this flaw, and alone make the book worthwhile.  They uncover the myth made famous by Smith that economics began with barter, replaced later by money.  Graeber is an anthropologist by training, and points out that no anthropologist ever found a culture that used barter.  Instead, every “primitive” (pre-money) culture discovered had a system of credits, a.k.a. debt.

The rest of the book then dives into history, showing how these debts turned into gold and silver money, formalized letters of credit, paper money, and into today’s digitized, virtual, fiat currencies.  Graeber does this not only for Europe, but also China, India, and the Middle East.  He explains era by era how those forms of money not only came to be, but also how they at times ceased to be, as government and banks failed to understand how money truly works, or simply when there wasn’t enough gold and silver to mint the coin needed to run the local economy.

Beyond the repetitiveness, the other problem with the book is that it felt like Graeber held on too tightly to his grand hypothesis that money is debt.  It felt at times like debt was his hammer and thus every discussed solution was a nail, when to me some looks distinctly like screws.  Case in point, in Medieval England, the crown was unable to mint enough coin.  The solution was that merchants all ran tabs at each other shops, which they settled at the end of each month.  No banks were involved.  No interest was charged.  That system is the equivalent of everyone using checks to make purchases, with the checks are cleared at the end of the month.  Is this really debt?  Certainly not all credits and debits would balance out for every merchant, and thus at the end of the process, some of the merchants might have to settle up with cash (or debt).  To me, this isn’t debt but instead just a virtual, local currency where the money tokens are lines in the ledgers of the stores rather than bills printed on paper sheets or wooden nickels or any of the other tokens used as local money.

Flaws aside, this book is a good 400 page reminder of how complicated the seemingly simple concepts of money and debt really are.  A good enough reminder that makes me feel a bit more compassion to the economists and central bankers who failed to stop the 2007-2008 debt crisis, who will no doubt fail to stop the next crisis, and the one after that.