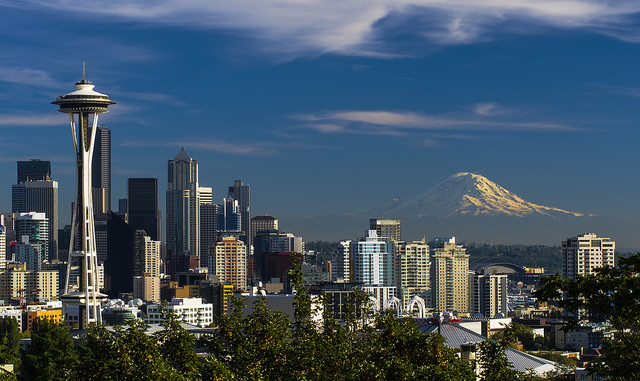 Far less obvious, but as important, is the information hole.  Specifically, the lack of information on what is happening around the impact-oriented world.  And where it’s happening.  And who is making it happen.

This is one assumption I discovered very quickly into launching Fledge, my conscious company accelerator.   I had assumed there were blogs like TechCrunch and GeekWire covering the news of impactful startups, covering the investments of the impact venture funds, covering the transition by foundations from grantors to impact investors.

Without such a blog, we’re left with networking, grapevines, and the occasional big gathering to discover what is happening in one’s own city, and other cities.

I do a lot of networking and a lot of first-meeting phone calls with people in other cities.  Dozens of times I’ve told the story of what happens here in Seattle.  The (seeming) uniqueness of our ecosystem.  And the boastful challenge that we’re leading the world on for-profit social good (and the nonprofit side too thanks to the Gates Foundation HQ here too).

The key to Seattle’s uniqueness is 220 & Change, a city block housing Impact Hub Seattle, Social Venture Partners, and Pinchot University.  The combination of these three key tenants almost three years ago then attracted nearly all of the social good ecosystem as tenants of the Hub.  Fledge operates within the Hub, along with Unitus Seed Fund, Elevar Equity, Slow Money NW, Community Sourced Capital, MercyCorp, Oxfam, and other impact funders.  Sustainable Seattle, Seattle Good Business Network, and other ecosystem-building nonprofits are tenants too.  Seattle Toniic meets at the Hub, with half of its impact investing members being the impact investors who funded the launch of Seattle’s Hub.

Beyond my own conversations, we have some confirmation that something special is happening here in Seattle.  A few years ago, the Kauffman Foundation sponsored a series of videos showcases entrepreneurship in various American cities.  For each city, they picked two themes that showed off something special.  For Seattle, that was for-profit social good.

This all said, what I really want to know is what is happening in every other city.  I want to know how much longer I have to wait for ImpactCrunch or ImpactWire to replace the grapevine with a daily news feed.  Who out there is ready to tackle that project?  If you know that person, please introduce me.  I’m eager to help fill that hole.