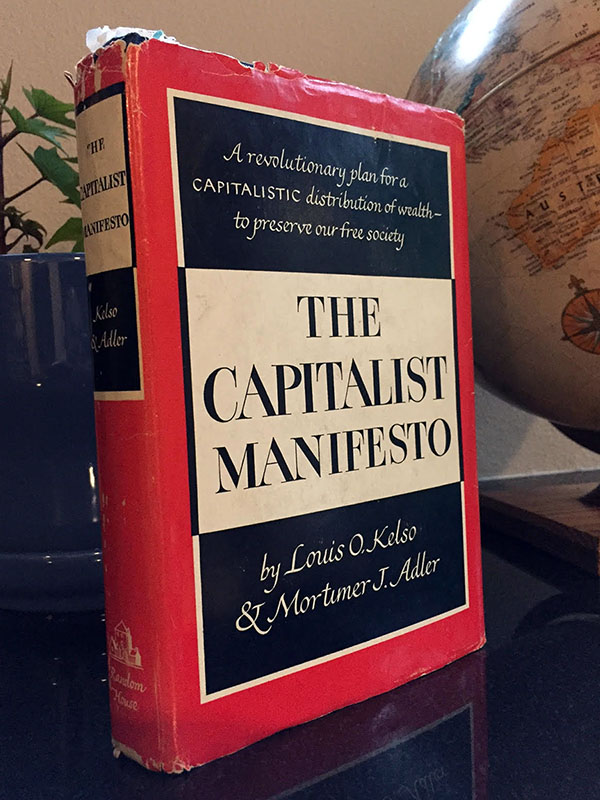 Speaking of manifestos… in 1958, 110 years after Marx, Louis Kelso wrote The Capitalist Manifesto as an alternative solution to the rift between capital and labor.

This is one of those books with a handful of interesting ideas, wrapped in 265 pages of repetitive rhetoric, closer in style to a long academic paper than a New York Times nonfiction bestseller.  None the less those few ideas were worth the effort:

1- Kelso agrees with Marx, that there is a flaw in capitalism, as practiced, which leads to inequality of both income and assets.  The first 100 pages can be summed up as the rich get richer, citing 1950’s statistics showing that 5% of Americans own half of all the assets (an inequality that has grown further since then).

2- Kelso’s solution is a a new Capitalism (capital ‘C’) that focuses on increasing the number of capitalists by distributing ownership of companies to their workers.  The book advocates for government policies that would make this advantageous, but the details on how this work in practice are left out, as are the details on how these new capitalists would go about buying and selling these new assets.

Perhaps in the 1950’s it felt like every American worked for a public company, and thus illiquid, untradable shares of private companies would not be a problem for the majority of workers, and thus not a worth discussing.  It’s far more difficult and expensive to make a private company public than it used to be.

What’s further odd about the absence of details is that Kelso is the inventor of the American ESOP (employee stock option plan), a structure wherein the employees of a company can buy 100% of the ownership from its founder.  Kelso used that structure two years before publishing this book to sell his family-owned newspaper to its employees.

3- Kelso’s theories then goes off into the weeds, advocating that companies should distribute 100% of their profits to their owners each year, restructuring the tax code accordingly, and updating corporate law to mandate those dividends.  Kelso says that once that happens, all these new capitalists will then have incomes from their capital in addition to their income from their labor, fixing income and asset inequality.

He seems to have not noticed that if the dividends are are distributed, there won’t be any capital left to help those companies expand, compete, etc.  This distribution of profits is not a throwaway remark.  It’s repeated dozens of times across the second half of the book, and thus its again quite odd that Kelso didn’t explain how this is supposed to work in practice.  In one and only one of those instances, there is an off-hand remark that the companies would have to then compete for their capital, but no details are provided to explain what form that might take, how that capital might dilute the capitalists, or from here in 2017, how the 15 million businesses in America might all manage to advertise their capital needs on January 1st when they all find their bank accounts empty.

4- The last interesting idea is a tangent around foundations.  Kelso correctly points out that money donated into a foundation is public money.  By law, it is only supposed to be used for the common good.  What’s interesting is that he points out that foundations are a popular creation of capitalists due to the structure of the income tax.  A rich capitalist can either pay taxes to the government when a “wealth event” occurs, or they can donate the money into a foundation and it is then never taxed.  If instead the tax code allowed for tax-free donations of assets to people with few assets, we might see rich capitalists spread the wealth that way, rather than through foundations which typically hold those assets indefinitely.

All in all, despite the writing style, I found it interesting to see capitalism through the eyes of a 1950’s economist, and to see yet-another idea that pushes the boundary of how to fix Capitalism’s flaws, but my quest for answers on income inequality continues onward.