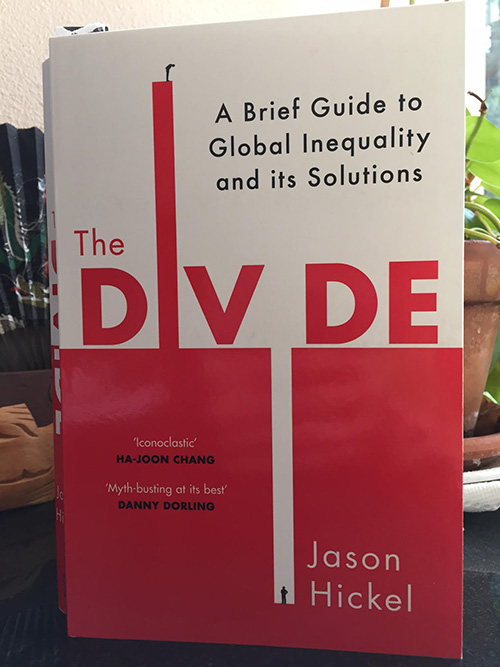 It has been four months since Debt: The First 5,000 Years, and my quest to find answers to inequality.  In that time I came across The Divide, by Jason Hickel, which claimed in the subtitle “A Brief Guide to Global Inequality and it’s Solutions” to provide not just problems but also solutions.  That jumped it to the top of my growing stack of books.

The first two thirds of the books are not so much problems, and causes.  I’ve heard bits and pieces of stories before on how Spain, Britain, France, and the United States interfered with the economies of the so-called developing world.  This is the first I’ve seen all those stories in one place, well explained, and fully believable.

From Spain taking all the gold they could find from the Americas, England destroying the industries of India in the name of colonization, the Opium Wars, the coups and dictators backed by the Global North, to debt and the policies of the IMF and World Bank.  Hickel’s premise is that “developing” is the wrong adjective, as most of the world lives in systems purposefully designed to keep them from industrialization and modernization.

This is backed up by a 2014 paper by Gabriel Zucman, “The Missing Wealth of Nations” which also shows a net flow of cash from the Global South to the Global North, which I also happened across in the last few weeks.

Plus it is nice to see Hickel fully backing up my premise that the $1.90 poverty line set by the World Bank is bunk.  He chooses and justifies $5/day, which would mean more than half the world lives in poverty.

The last third of The Divide isn’t so much solutions as a laundry list of actions the Global North needs to stop doing.  Rather than a new big idea, the idea is to stop repressing the Global South, let them follow the path the Global North took in their developing, and stop the modern colonial extraction of those economies.

But then before he ends the story, Hickel wisely points out the bigger issue facing the world.  If the Global South catches up to the Global North, if another few billion people join the global middle class, if the divide is filled, then the global economy is doomed, as the carrying capacity of the planet at a European standard of living is well below 7 billion people.

Teaching at Bainbridge Graduate Institute (now part of Presidio Graduate School), this is a different global story I’ve heard in bits and pieces for years.  Hickel does an excellent job of summarizing it in a dozen pages, as he does on global inequality.

In the end, I felt satisfied at understand the causes of global inequality, and felt close to helpless at fixing any of those root causes.  It makes me wonder who has a similarly well-written story of the causes of inequality in the United States, as I’ve heard plenty of bits and pieces of my country’s story.

Meanwhile, I’m an entrepreneur and impact investor and thus have some tools at my disposal to make some systemic changes.  Perhaps they are not enough to overcome these bigger issues, but perhaps someday they will be, so I’m far from giving up hope, and I’m far from done from reading what other’s are thinking are solutions.