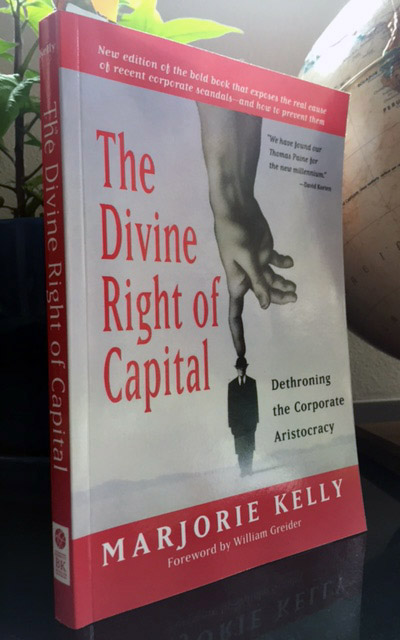 A much better manifesto of Capitalism is Marjorie Kelly’s The Divine Right of Capital (amazon.com).  In it, Kelly explains in greater detail the divide between capital and labor, some of its origins, and dives deep into the assumptions latent within the current system which she hopes to see uncovered and overturned.

Kelly repeatedly returns to the metaphor of feudalism, with the noble Board of Directors paying tribute to the shareholder lords, ignoring the needs of the masses of peasant employees.  It’s quite a good metaphor, especially as she espouses for democratization of companies, just as politics saw and end of feudalism and monarchies with the rise of democracy over the last 200+ years.

Kelly’s other big idea is to switch around the key narrative of financial reporting.  Rather than:

this should instead be:

Kelly takes that one big step further, advocating that the capitalists share in the ownership of the companies.  Her big, potentially revolutionary idea is that employees should threaten to walk out, all at once, negotiating with the shareholders to see just how much those shareholders value their employees.  She gives one anecdote of this happening, during a buyout of an advertising agency, and thereafter suggests every employee do this whenever the are being “purchased” in an acquisition.

Beyond that, Kelly’s spends nearly every page explaining why “ownership” needs to be shared, why ownership of companies isn’t the same as owning a house or car, why employees are undervalued, and arguing in a dozen different ways why she’s right.

What’s missing from the 200 pages is how to go about making that change.  Beyond Kelly’s walkout idea, which I worry could happen en masse, creating an economic mess bigger than 2007/2008, she’s not helpful in offering solutions.  And even if her change came to be, Kelly provides no details on how employee ownership is supposed to work in practice, how shares get allocated, how shares get created and destroyed when employees start and leave jobs, etc.

All in all, this is a far better description of the problem than Kelso’s The Capitalist Manifesto, but similarly left me without a clear path to follow.

What comes next from the global pandemic? Unfortunately, it looks like we’re headed to massive unemployment. At least the 25% of the Great Depression. Possibly more, if the lock downs continue for 6 or 9 months. From today’s Seattle Times, the following chart shows the number of jobs at risk in King County (where Seattle and Bellevue are located), Snohomish (the northern suburbs, and...

Now that the governments of the world are woken up to the emergency at hand and finally telling their citizens to stay home, it’s time to focus on how to ensure those citizens stay fed for the coming months. So far, the plans out of Washington DC are not the right answer. Paid sick leave, yes. Payroll taxes and airline bailouts, no. Payroll taxes only work if there are payrolls being paid...

Watching the quarantine of Wuhan was one thing. Hearing about the first case of Covid-19 30 miles from my home from someone returning from China another. Then came six deaths 20 miles away, a school shutting down for a deep clean 15 miles away, and Amazon and Facebook employees with confirmed cases 10 miles away. Anyone in Seattle who isn’t already prepared for a citywide shutdown within...