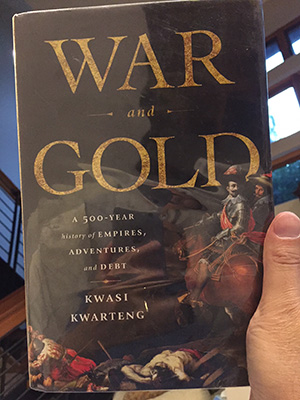 Continuing my series of book reports on economics, I was walking through my public library when the title War and Gold caught my eye.  The book explains (in far too much detail) the history of money over the last 500 years, starting with the Spanish exploitation of the New World and the subsequent flood of silver into Europe and continuing century by century to the Volker/Regan solution to American inflation of the 70’s and 80’s and Thatcher’s privatization efforts over in Britain.

Despite the oversupply of minutia of treasury secretaries and pound/gold exchange rates, this book does contain some very useful broad-scale economic knowledge that I’ve not seen elsewhere.

Paper Money – Until the early 1900’s there was no trust in paper money.  For 400 of the past 500 years, money was considered to be gold, silver, or a mix of the two, and paper money was a form a debt owed to its holders by the government.

Multiple times, often when wars broke out (hence the title), government would print paper money and citizens would reluctantly use it, as the gold and silver was extracted from the economy to pay for soldiers and equipment.  Before 1900, in every single case, that paper money lost value, between 50% and 99% of its value.

I was expecting to author to have that in his conclusion at the end of the book, but alas there wasn’t much of a conclusion.  Given the current Federal Reserve Note here in the U.S. has lost 96% of its value since the Federal Reserve was created in 1913 and given the Euro has lost almost 30% of its value since it was first issued in 1999, its odd that anyone trusts paper money.

Gold and Silver – Then again, most of us don’t hold our savings in paper currency, but instead invest it in assets, and ideally in assets whose value keeps up with inflation.  The most ancient and trust of these assets are gold and silver.

The big lesson from this book is that gold and silver can suffer from inflation too.  Spain flooded Europe with silver from its colonization of the New World, and that caused many prices of goods and labor to lose half their value as measured in silver.

There was far less gold than silver mined 500 years ago, but gold was more commonly used to back paper currencies, and over 500 years the exchange rate to and from gold changed as that gold moved around the world due mostly from the costs of European wars.

Conclusion – There is no form of money that is inflation proof.  Every paper currency ever created has lost significant value over time, and while silver and gold are still highly valued, they are not the panacea that the gold standard bearers claim.

The big lesson is thus that money is useful to make the economy work, but money is not to be trusted as a long-term store of value.  The book doesn’t hint at what is.

The coronavirus pandemic is laying bare quite a lot of the normally hidden features of our modern capitalism system. And the government reactions to the economic shutdown is demonstrating that we don’t actually live in an capitalistic system, but something of a hybrid with the incentives and rewards of capitalism (when times are good) but the downside cost of socialism (when the economy...