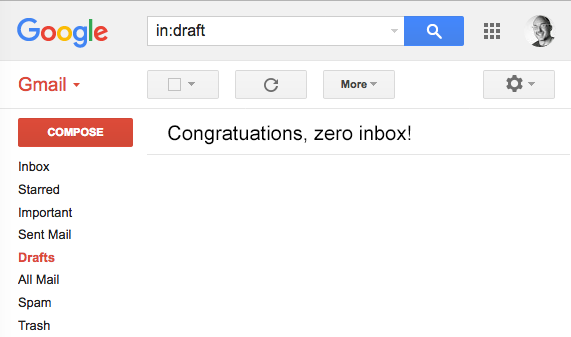 I love the 21st Century.  The productivity afforded to us by technology here in the 2010’s is utterly amazing to my old-enough-to-remember-the-20th Century mind.

Case in point, I sit here in the late afternoon of a rather quiet workday in mid-December, with 100 email arrived and read since yesterday, and 45 email sent.

I often hear laments about the flood of email (and spam) in our lives, but step back for once and note what this means.  I was able to communicate with 40 different people today, 1-on-1.

But that’s not all, I also bought my first paid ad on Facebook, spending $100 to try and reach 10,000 others.  Earlier in the week I fired off my first Google AdWords campaign in years, spending another $100 to hopefully reach a different 10,000 people.  I answered a few questions on Quora, posted the Fledge8 Demo Day videos on YouTube, and posted some updates to LinkedIn, which historically reach thousands more.

And let’s not forget Mailchimp, which sent the latest Fledge newsletter to 7,500 fledglings, investors, mentors, and supporters.

So step back further and see this for what it is.  One person with one laptop, sitting alone in a living room on an island can have dozen of 1-on-1 conversations and broadcast messages to tens of thousands of others.  All in one day.

This as compared to business in the 20th Century, in my father’s day when he was an entrepreneur like me.  Most of his conversations were by phone, with all the old issues of phone tag to get both sides on the call at the same time.  The other conversations by typed letter, dictated to his secretary, typed and checked by dad, then stamped with the postage meter and hand carried by the post office.  I don’t know how many conversations he could have in a day, but even with the secretary doing the scheduling and phone tag, I doubt it was more than 15.

His equivalent of Facebook and Google was the Yellow Pages.  His equivalent of Mailchimp was single-color flyers, stuffed into envelopes and again stamped and sent by the post office.  One of my summer jobs was typing in the mailing lists for those flyers, and thus I know first hand how much more work it was to get a mailing list in 1985 vs. 2016.

All this reminiscing makes me wonder what comes next.  Will there be a replacement for email in my lifetime?  Text is useful but doesn’t solve the same problem.  Slack and instant messaging also solve different problems.  Will my kids in their 40’s look back at the 2010’s and our obsession with a zero inbox as dated anachronisms, as I look back at my dad’s dictation machine and Rolodex?

Will they be juggling 1-on-1 500 conversations in a day, jacking in and out of augmented reality meetings as quickly as they text each other today?

Yes or no, what’s interesting to note is that what this all comes down to are conversations between human beings.  Conversations that help us understand what we all do, and how we can do it together to (hopefully) further civilization.

Meanwhile, I have a zero inbox for the third time this year, and with that to celebrate, I celebrate by writing a blog post, to keep all of you from zeroing your own inbox. 🙂