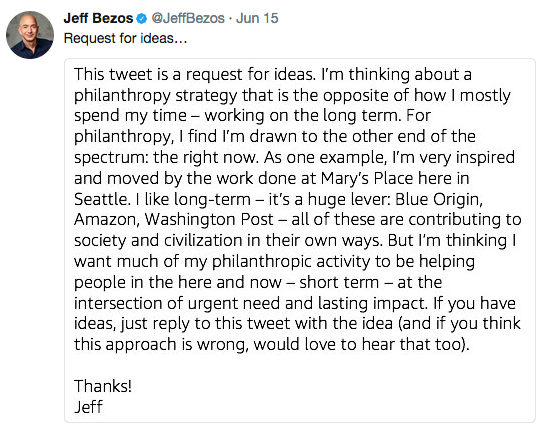 This is the quandary of philanthropy.  As commonly practiced, it makes the philanthropist and recipients feel good for a while, but doesn’t fix any underlying issues, and doesn’t scale to help everyone in need.

Jeff, you are known as someone who can re-design whole systems.  It’s time to spend the time to figure out how your billions can do that for far more than Mary’s Place.

You’ve not followed the crowd over the past 20 years, so why are you considering doing that with your philanthropy?  If you’ve not studied the last 100 years of philanthropy, it’s not a complicated story.  100 years ago Andrew Carnegie was the world’s richest man.  One day he decided to be a philanthropist, and invented the foundation.  Most other entrepreneurs followed those footsteps, culminating in the Bill & Melinda Gates Foundation, a short walk from your office.  They do some good work in the world, but nothing yet to the scale of the Carnegie libraries and so far little that will be remembered 100 years from now.

What Carnegie, Ford, Hewlett, Kellogg, Rockefeller, Kauffman… and Gates all overlooked in their transition from entrepreneur to philanthropist is that they were once all entrepreneurs.

Philanthropy, in the form of foundation making grants is a 20th Century idea.  You are a quintessential 21st Century entrepreneur, and here in the 21st Century we’ve realized that it is possible to mix entrepreneurial methods with doing good in the world, and we call that impact investing.  This is the idea that you can be a capitalist, earning money while at the same time doing good in the world.

You may not think you need to make any money while doing good, but you do.  Once you open up your eyes to see the big problems of the world, you’ll discover that they impact billions of people.  If you liquidated every share of Amazon you own you’d have less than $10 per person who needs your help.

That is a root issue of philanthropy that is rarely talked about.  We turn to the foundation to solve big global problems, but there isn’t enough money in philanthropy to any one big problem.  I gave a talk outlining this fact a few years ago.  In short, the top 100 foundations combined have fewer assets than Amazon.  Amazon has done a lot for retail, cloud, etc., but could it solve global poverty?

The solution, which is still new, and which could use people like you to innovate is to use the capital of would-be philanthropists combined with the scalability of the for-profit business model.  Just as Coca-Cola can get a bottle of sugar water to any of 7 billion people today, every one of those people should have clean drinking water, a sanitary place to pee it back out, an electric light, a cellphone, access to education, and access to healthcare.

We’re billions short of those basic goal, and if you’d like to help, I and others would be happy to get you up to speed on how we do this.

You’ll find me across town, in Pioneer Square, at one of the centers of impact investing in the world, Impact Hub Seattle.  lunarmobiscuit.com/contact when you are ready.