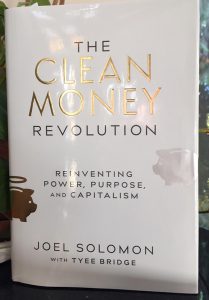 I met Joel Solomon five years ago.  Someone pointed me to him as knowledgeable and experienced.  I knew of his work Renewal Funds, and a few years ago visited his Hollyhock on Cortes Island in British Columbia, Canada to attend his Social Venture Institute.

(Disclosure: sometime in all that he agreed to invest a tiny amount into Fledge, one of my contributions to the field of social good.)

I’ve talked to Joel a few times.  Perhaps two hours in total over the last five years.  I’ve seen him speak at various events.  I thought I knew who he was and what he did.  Then I read The Clean Money Revolution and discovered a whole lot more.

As I’ve written about many times before, I love it when unseen assumptions are brought to the surface.  This book is a mix of biopic and primer, between the two unwrapping the history of social/impact/clean capital.

Six years ago when I left tech to join what I call the “social good” sector, it felt like I was jumping midway into a story that was being told.  There was beginning decades earlier, but those early days were not being talked about much, if at all.  Over the past year through various sources, I’ve uncovered a lot more of that story, and uncovered the people who have made social good happen.

This book fills in a lot of those gaps as Joel Solomon was there at the beginning.  If you like origin stories, you’ll have your fill in The Clean Money Revolution.  There was an organization before Social Venture Network, which itself spawned a dozen organizations which live on today.

That is all interesting to someone like me, who wants to understand why things work they way they do, unsatisfied with the explanation that “this is how its always been done.”  That is the main theme of the book, to uncover those assumptions in the economy and like Real Impact from Morgan Simon, teach the readers the importance of impact investing.

It is also interesting to compare and contrast Joel’s biopic with Morgan’s, as they both have moved the ecosystem forward more than most.  Joel started back when Morgan was a toddler, but both have been at this work far longer than me.

Six years in, I still feel like a newbie, but the more events I go to, the more people are looking to me as one of the elders.  I can’t imagine what that must be like for Joel, who has been doing his work for over thirty years.  I am looking forward to finding out in the 2040’s.