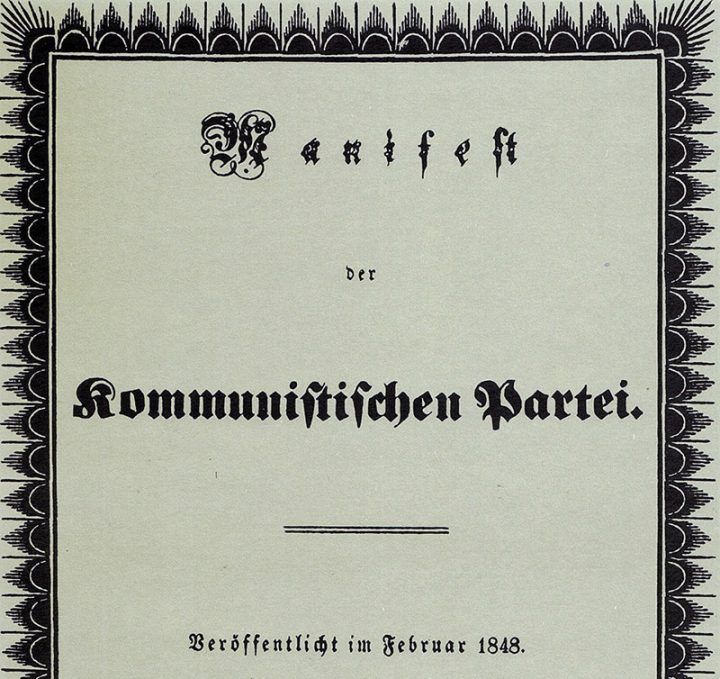 Jumping forward to 1848, 72 years from The Wealth of Nations, Great Britain, Western Europe, and the United States experienced an economic revolution in the Industrial Revolution.  Steam power, coal, gaslight, railroads, etc.  With that change came the industrialization of work, with far more powerful capitalists and unpowerful laborers.

After slogging through 1,000+pages of Adam Smith, and 570+ pages of Piketty, it was a pleasure to find an historic thinker able to condense his thoughts into just 30-odd pages.  Given the length, I highly recommend the half hour effort of reading the whole pamphlet, as Marx is an excellent writer and measured per word, this paper probably did more to change the world than any other book in history.

Chapter one does an excellent job laying out the problem at hand in 1848.  Powerful capitalists (the bourgeoisie) controlling a labor force with no power (the proletarians).  The same basic view as Smith, and little here that still doesn’t still apply today.

Chapter two is where Marx takes a leap of logic, which in hindsight is where he went wrong.

His argument goes that labor has no power, so the solution is (1) to take all the power from the capitalists, abolishing all private property for everyone.  Then (2), just in case the capitalists somehow still have more income, create a highly progressive income tax to ensure no one can ever become a capitalist.  Make sure (3) no private wealth continues after death by abolishing inheritance, and (4) confiscate any wealth of emigrants, to ensure the capitalists simply don’t flee the system.

Those steps would certainly eliminate the inequality in society, both income and wealth inequality, but as we’ve seen when countries try and implement those rules, it simultaneously eliminates the parts of Capitalism that work well, such as capital investments, market-driven production, and creative destruction.

Continuing on in his conclusion, Marx believed that (5) creating a central bank of all assets would somehow efficiently deploy that capital, (6) centralizing all press and all transport in government hands would ensure free speech and free movement of goods, and (7/8) centralizing all production, both industrial and agricultural would ensure the right goods were produced and enough food was grown to meet everyone’s needs.

Underlying Marx’s conclusion is the idea that if the government were run by labor (i.e. if there were a true single universal class of citizens), then there would be no exploitation of labor and somehow would come an ideal deployment of labor, needs, and resources.  What Marx failed to think of is that a new group would fill the power vacuum, a group of bureaucrats who are neither industrial laborers or farmers.  In every government that called itself Marxist, a small class of officials took that power, set the rules in their favor, and failed to efficiently allocate the centralized resources.

As a card carrying capitalist, what I found most interesting reading the Communist Manifesto is how much of Chapter I seemed accurate describing the world today.  This is a 169 year old pamphlet written before the abolishment of slavery, before the telegraph, before the light bulb, before the automobile and airplane.  Growing up in the Cold War, this was the enemy handbook, and yet there is still truth in its analysis of Capitalism.

All the flaws come in Marx’s conclusions on what should happen.  Thinking about the inevitable conflicts caused by income and wealth inequality, my worry is that that Marx was not wrong in what will happen, that Lenin, Mao, Castro, etc. just pushed Marx’s ideas along too quickly, in all those cases in economies that didn’t actually fit the conditions in Chapter I.  I worry that the populism shown in Brexit, Trump, and Le Pen are harbingers for a Marxian (but not Communist) revolution.

So with neither Smith nor Marx nor Piketty providing usable answers, it’s time to keep looking for a book with answers.