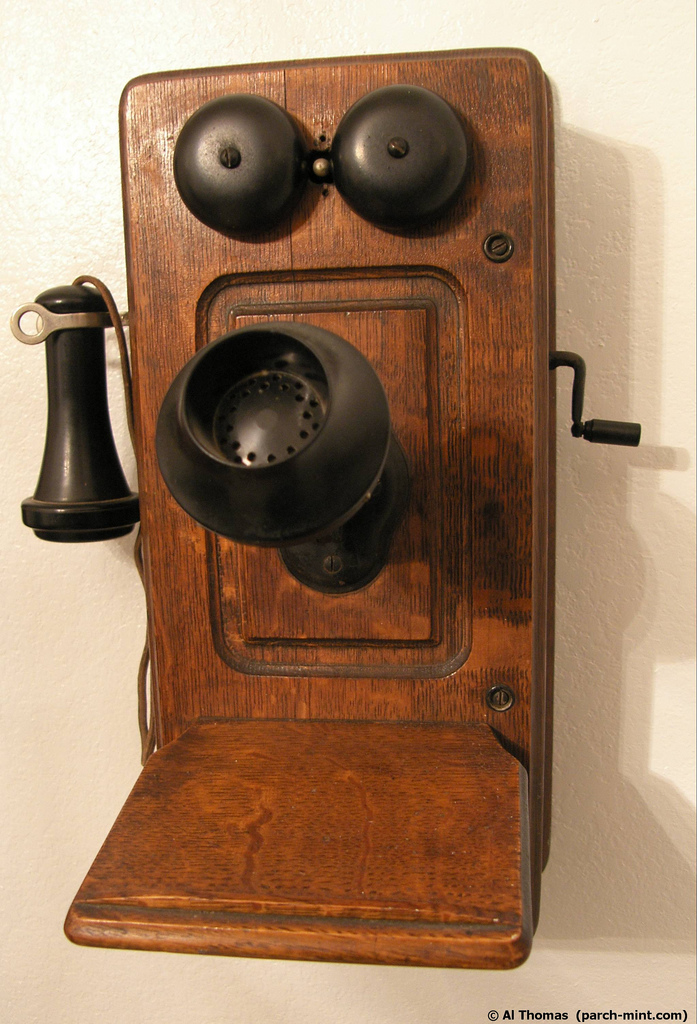 These days, I tend to teach my entrepreneurship classes in a “flipped” format, but at least a few times per year I teach a shortened workshop, and thus fall back on the good old fashion format of live lectures.  Whenever this happens, some bit of the lecture grabs me as needing a bit more research to better understand the facts myself.

One such area is the topic of “sustainable competitive advantage“, and specifically, the anecdote I use to describe the “network effect“.  Microsoft, Google, Facebook, Amazon, iTunes, and many other modern technologies succeeded due to this effect, but the anecdote I like to use is 137 years old, the telephone.

The anecdote goes this like: One telephone has no value.  Two telephones have almost no value.  After 100 phones, you may know someone with a phone, and if so, then there is value in you signing up for telephone service.  After 100,000 phones, you very likely know many people with phones, and the value is measurable.  And at 1,000,000 phones, many of your friends, colleagues, and family will have phones, making the service highly valuable.

I don’t bother trying to put a number on these values, as all heads start nodding by the middle of the anecdote.

However, what I find is that this anecdote teaches a second lesson, in the form of a second question.  How do you bootstrap a business that relies on the network effect to succeed?  The problem for me is that I had no idea how Bell managed to sell the first telephone, or tenth, hundredth, etc.  I did know that it took about 50 years to reach half the U.S. population, then another 30 years to reach the rest.  Plus I knew that Bell did not rely on a freemium model, which moves the problem out of the realm of sales and into the realm of the realities of fund raising.

A bit of googling later, and I found the answer.  Actually two answers, as there were two business models used to bootstrap the telephone business:

First, some exceedingly wealthy people bought a pair of phones, connecting one to their home and the other to their office.  These people had to negotiate with the local telegraph company to string wires between the buildings, and the telephones only spoke to each other, not as part of a network.  None the less, these first sales came at a high price, and were no doubt used by Bell the convince the next wave of customers of the value of telephones.

Those other customers were the the second, larger business model.  Licensing telephone equipment to new (startup) companies who provided telephone service to a single town or city.  In January 1878, the District Telephone Company of New Haven (Connecticut) was the first of these licensees.  They then had the challenge of then selling their first telephone subscription.  They too likely found a rich customer who subscribed to two phones, but they connected those phones to their new network.  It took just one month before the first-ever New Haven telephone directory was published, with 50 names, but no telephone numbers, as those were decades away from being invented.

Eventually, the AT&T company connected these little companies via “long distance” lines, consolidated most of them into one large company, and ultimately made a deal with the U.S. government to become a regulated monopoly, specifically to ensure the network effect would continue the company’s growth into the 20th Century.

There are many other lessons to be learned about the network effect, monopolies and dealing with the Federal government, but turning back to 1878, one other question has long bothered me about telephones, and this research answered that question too.

Back in the day of human operators, no phone numbers, no computers, how did the telephone company charge for service?

That answer was simpler than expected.  The District Telephone Company of New Haven charged $1.50 per month.  There were only a few dozen phones to call, no long distance, nor anything else to charge a premium, thus this simple flat rate pricing makes sense.  In 2014 dollars, looking solely at inflation, this $1.50 is about $40.00.  The $1.50 is more like $350 if you consider how much more people earn today than 135 years ago.  Either way this lies somewhere between the price of an Internet phone and a cellphone, both of which now allow unlimited calling across the USA.

The network has certainly grown, and thus the value has grown, but thanks to the general deflationary cost of technology, the price we pay has not changed much across nearly a century and a half.

With that mystery solved… does anyone know what Bell charged their licensee for the equipment?

Like this post?  Listen to this story and others on The Next Step: Podcast.
Step #22: Selling the first telephone, and your first sale

After finishing The Big Short book I had to re-watch the movie. This time not only was I watching for signs of purposeful fraud vs. emergent fraud, but trying to tease out the difference between incompetence, fraud, and something else that is something between ignorance and stupidity and folly. A real world example of this showed up in my life a week ago. I’m the Treasurer of my homeowner...

What do David Bowie, Jazz, and an unplayable piano have to do with the power of business accelerators? All get you out of your comfort zone, and that seems to be a secret to success. This episode of Tim Harford’s Cautionary Tales explains how. Listen to the episode first. My analysis is that one of the powers of an in-residency, in-person business accelerator is that it gets entrepreneurs...